Instruments of the Chrysanthemum Throne is a new dark fantasy tabletop roleplaying game due to be released later this week.  This post explores some of the key design decisions as the game evolved from concept to reality. 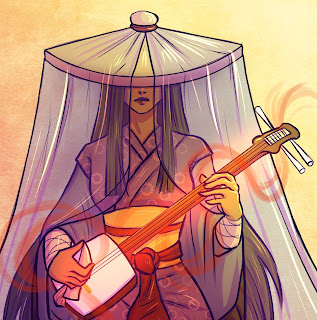 Back in 2016 I was part of a conversation on Google Plus about how we should aspire to make tabletop roleplaying games more accessible. I was struck by the notion that a one-page game could help encourage people who'd never gamed before, to give it a go.
A game on a page

I know there are already a ton of great one-page games out there. My first idea was that you make something immediately visually appealing. A game so interesting and simple that someone who has never heard of tabletop roleplaying might try. Something that would work as a paper tray-mat of the sort you might find at a fast-food restaurant and could use the shared meal-time as a catalyst for also sharing a short story.

Such a game might pick up on the traditional RPG experience of 'pick a character, travel around a mythical place and have some adventures'. To work as intended, it would have to have extremely high visual appeal and a very short handful of rules.

Rather than create a new fantasy map, Japan, with its rich historical vein of myth and monsters, could be a good backdrop. By using some real places, there is an opportunity to mix some authentic legends, with real geography and perhaps increase interest in people finding out more about Japan, or about roleplaying.

The first (incomplete) conception of the game from 2016 is pictured below, featuring an amazing map by Karl Vesterebrg. The game would have 4 pre-generated characters (designed to be perforated, detached and handed out). Each character would begin in a different map location and carry a different item that afforded them a unique power. Encounters would be resolved by four outcome cards, also detached and then randomly selected.
Needless to say, the combined challenges of simplicity and accessibility in a product that the target audience never actually asked for, are not to be underestimated and this idea ran out of steam before even getting to a testing phase.

Taking it to the next level

Rather than abandon the project entirely I decided to turn it into a more typical tabletop roleplaying product designed for a GM and group.

As I read about the myth and legends of Japan I came across the myth of Tsukumogami (objects that have achieved sentience after 99 years) and the idea that an object like this might play a trick on its owner if it was ill-treated was particularly appealing. It's always easier to blame an inanimate object for something going wrong, than accept your own culpability.

I'd really liked the concept of Wield by John Wick and Donna Giltrap had crafted a clever scenario along similar lines for the Kapcon Scenario Design Competition back in 2005. I wondered if there might be a way to build on the idea of Tsukumogami and create something darker that would create an interesting tabletop roleplaying experience. That’s how the Instruments were born.

Navigating this balance would be the heart of the game, with the idea that their characters are working to perform good deeds across Japan, by restoring the balance between natural elements using their Instruments, but also paying the price personally for these deeds. They are as much Instruments of the Chrysanthemum Throne as the objects they carry.

To bring this to life, the game needed to embed this wicked choice through the system. The below sheet gives you an idea of all the different things that this version of the game was trying to incorporate – far too many things as it turned out.
Refining the system

While the game needed to be much more streamlined, playtesting did reveal that a core game mechanic, borrowed from Chō-Han (a traditional Japanese dice gambling game, where players pick whether a dice roll will be EVEN or ODD before revealing the dice), was a fresh and interesting way to resolve actions. This was further tweaked to create just four possible outcome for each action.
Another element that tested well was giving the Instrument a physical presence at the table, by allocating it one of the two dice rolled. Although this was further refined to better reflect the insidious temptation that is the key game experience.

Some of the other elements – the role of the natural elements and different approaches to resolving challenges were shifted to become a part of the scenarios. The Instruments themselves changed from having a purely story focus, to allowing characters to further boost their chances of success, and also risk further chances of corruption.

A game set in another place and time needs support to be as accessible as possible for the reader. This includes notes that will help the players engage with the setting. In my view this should be presented as details that can be incorporated by a GM as appropriate to their interest and style, without overwhelming a reader with too much dry information.

A game like Instruments, which has a focus on the temptation of power, also needs to provide the characters with the necessary context and motivation to make decisions about how much power to draw and when. This takes the form of eight structured scenarios which help breathe life into the game world. The inspiration for these scenarios was drawn from the myriad of traditional Japanese myth and legends, with a decent helping of creative license applied.
The value of playtesting

In addition to writing the setting and scenario details, there was yet more playtesting to be done. Because the core game experience is about the wicked choices of the characters, the scenarios are presented in a relatively linear fashion, rather than as sandbox style experiences. Success at each stage of a given scenario is likely, but the cost to the character is entirely determined by the individual and collective decisions of the players.

Further feedback from playtesters was to build a political aspect into the largely supernatural challenges that the characters face, and thus the full campaign arc allows the characters to move from the role of mere instruments, to potential masters of the Chrysanthemum Throne.

An additional piece of feedback was that allowing the players to take a secondary role, giving voice to the Instrument of another character, would make the game richer and lift some burden from the GM.

Instruments wasn’t a continuous labour over the last five years, but it was a game that I picked up and put down again many times. On each occasion I think that the perspectives of others helped to continually refine and shape the game into its final form. Thank you to everyone who helped along the way.
Instruments of the Chrysanthemum Throne will be available from DriveThruRPG later this week.